Ganjam College, Ganjam has been allotted one Senior Division /Wing Naval Wing NCC Sub unit with a total strength of 50 cadets. Our NAVY NCC unit functions under 1 (O) NCC Naval Unit,Berhampur Odisha. The total tenure of a cadet is 3 years. Enrollment of cadets in the NCC is made at the beginning of the academic year ( mostly during August). The cadets have to undergo a minimum of four hours training a week, so as to make a total of 80 training hours a year. Training is imparted usually on Saturdays. During this period he/she has to attend two Annual Training Camps for being eligible to appear for the NCC- B & C Certificate examinations.

Cadets have been getting success in NCC and other community service activities since its inception in our college. Their contribution for social works is exemplary for the last few years in this area. Many cadets have also participated in State RDC parade and Delhi RDC parade. Many former cadets from this college have joined Defense forces and State Police Forces. 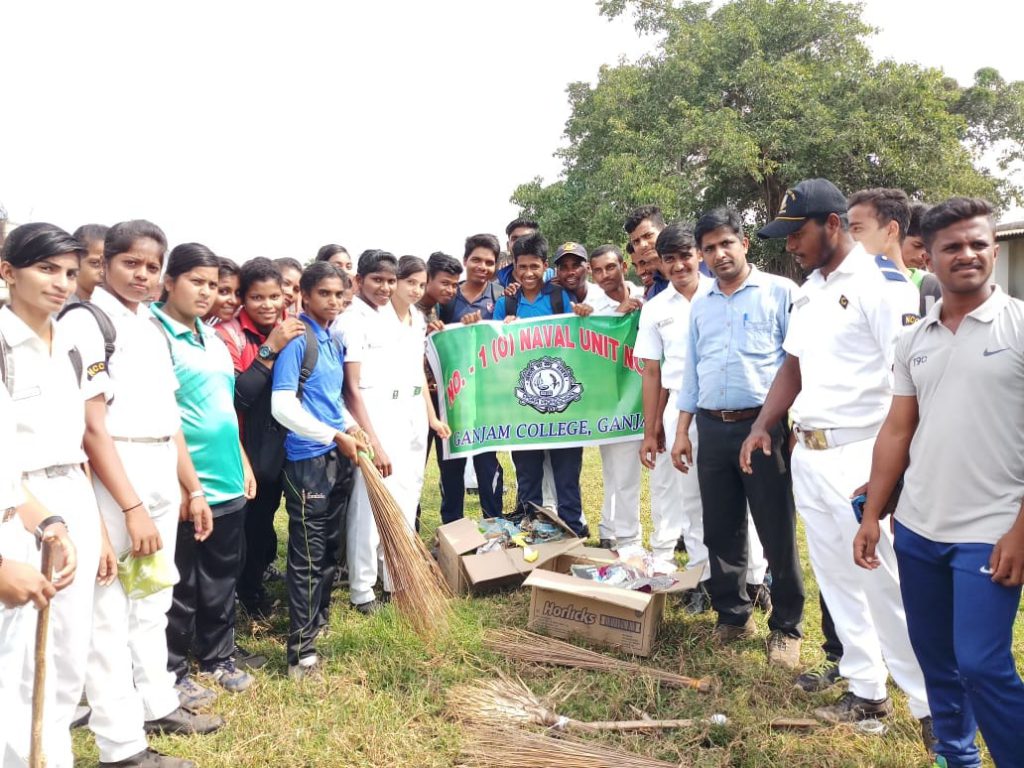 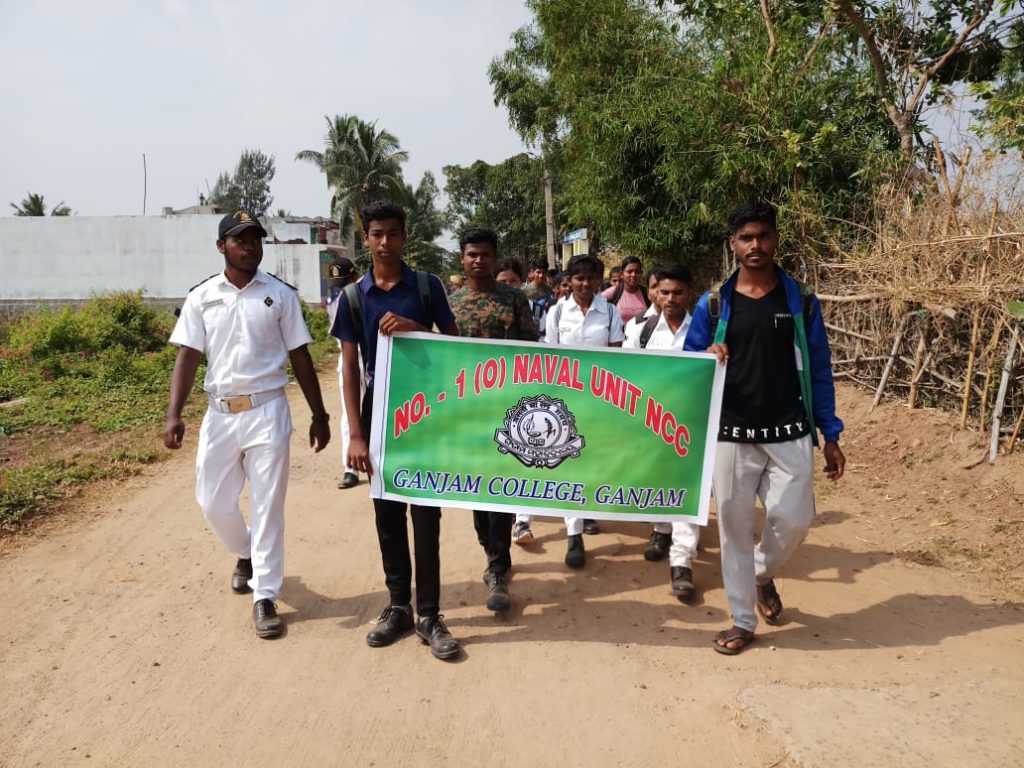 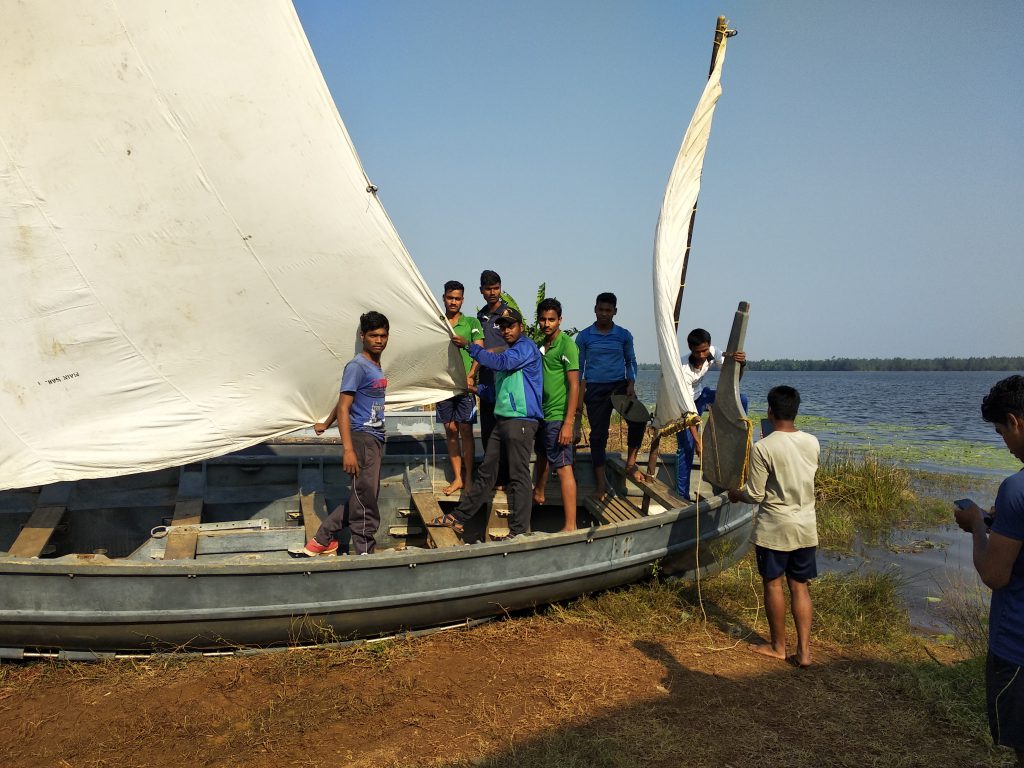 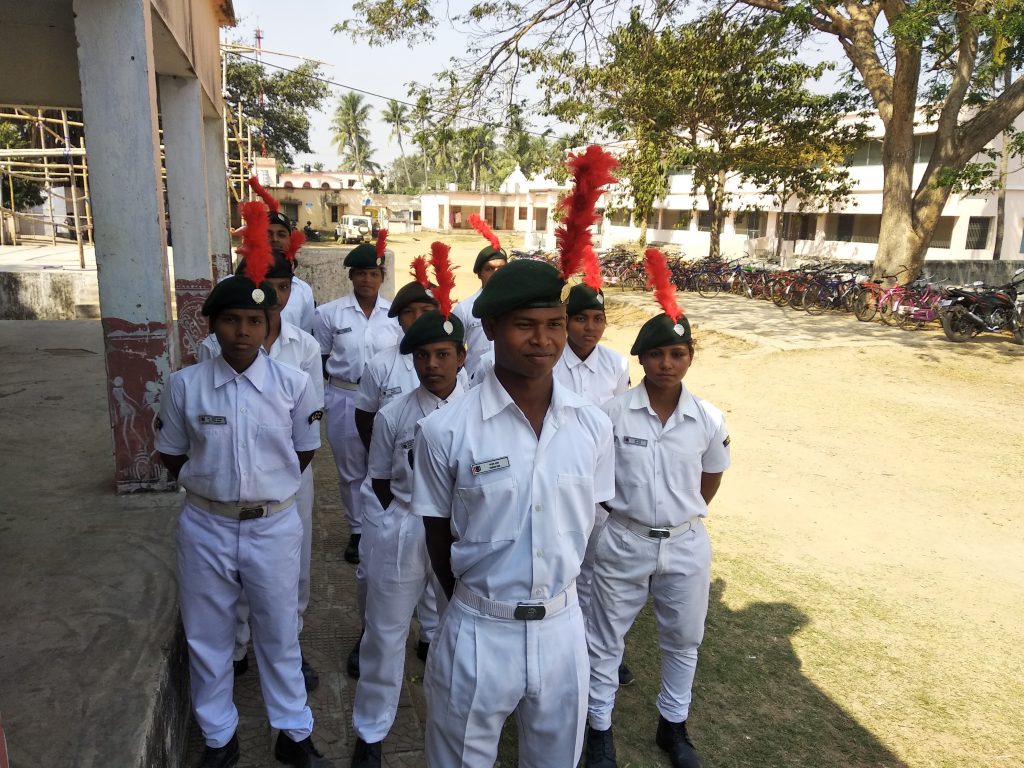 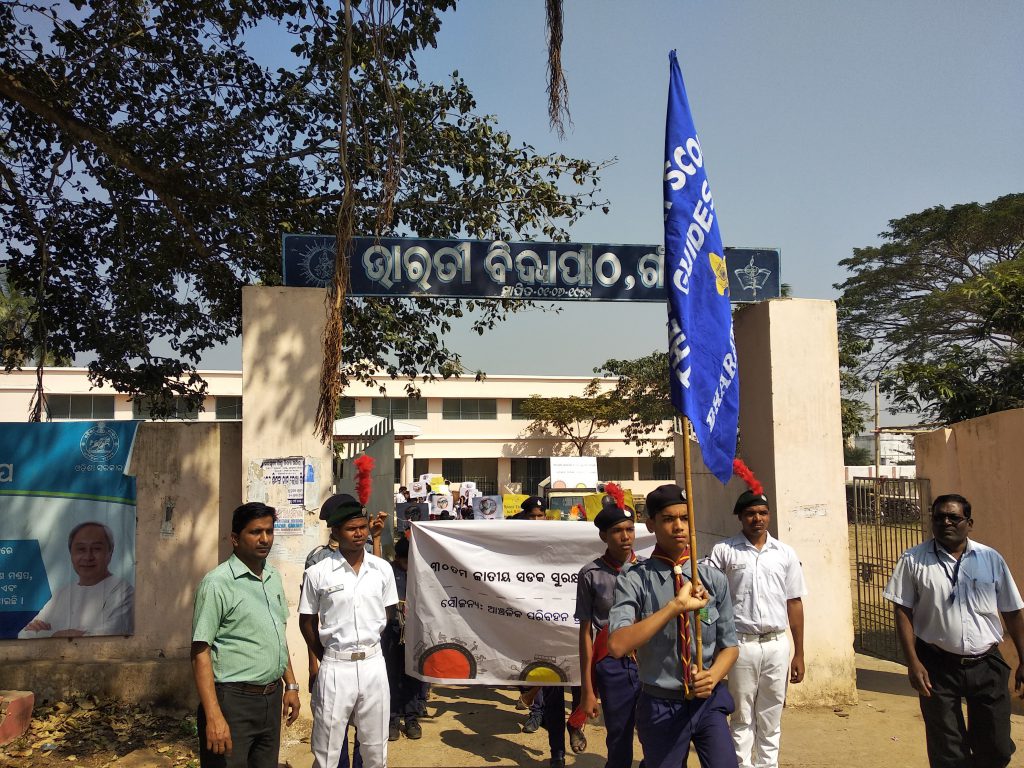 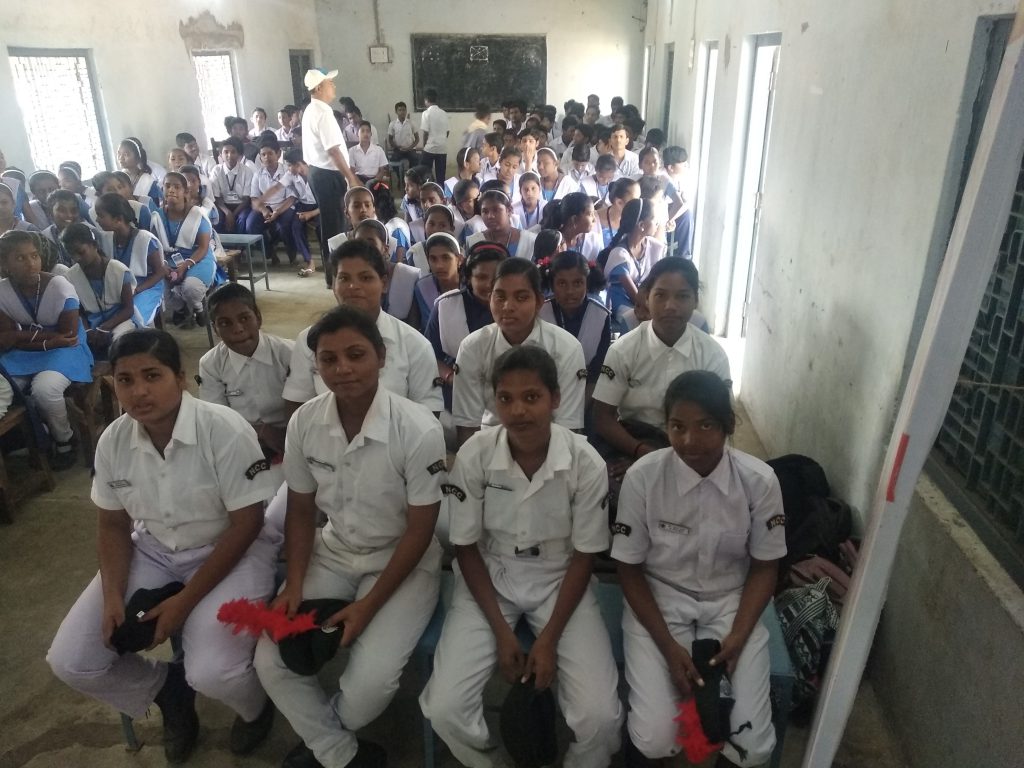 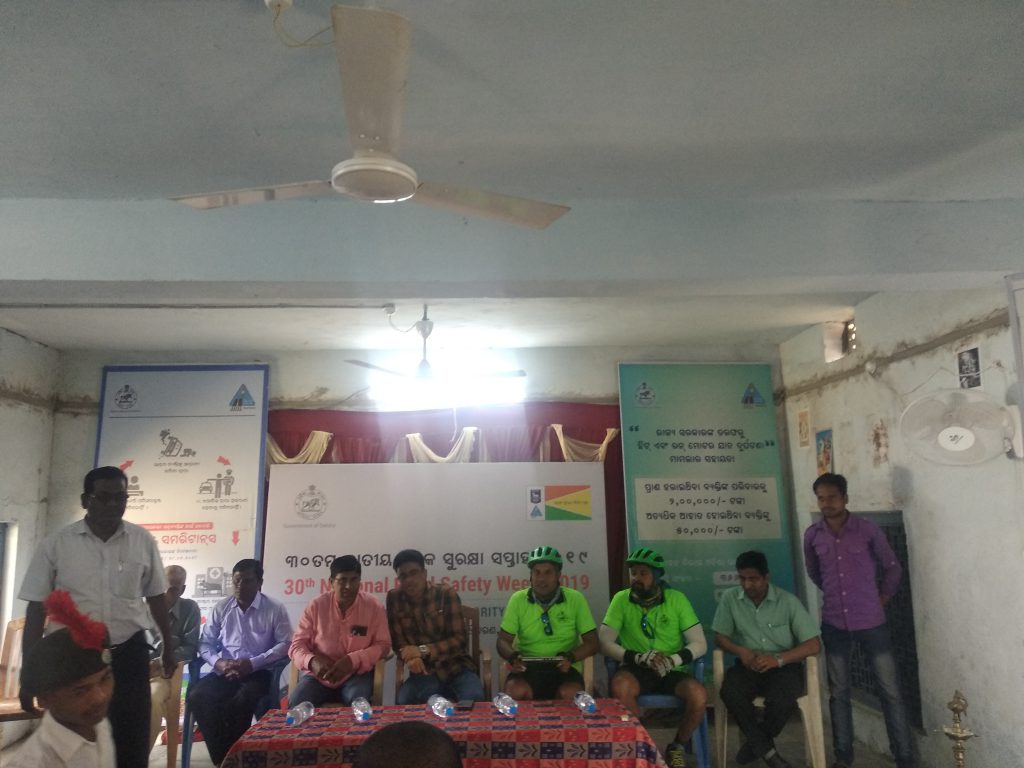 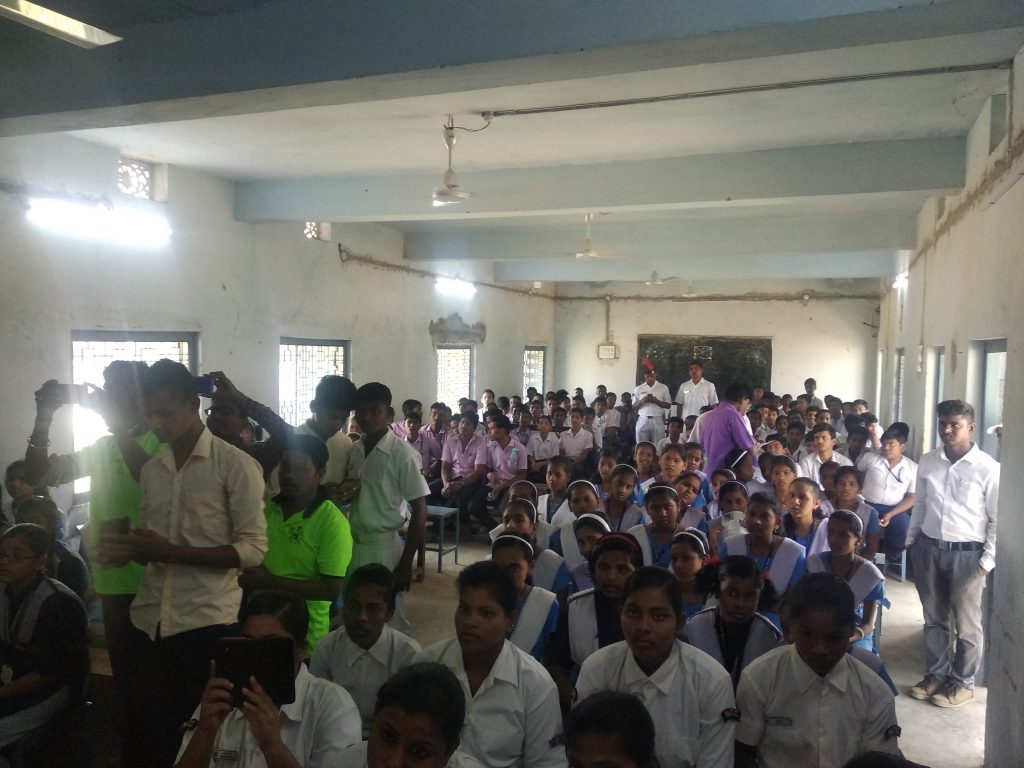 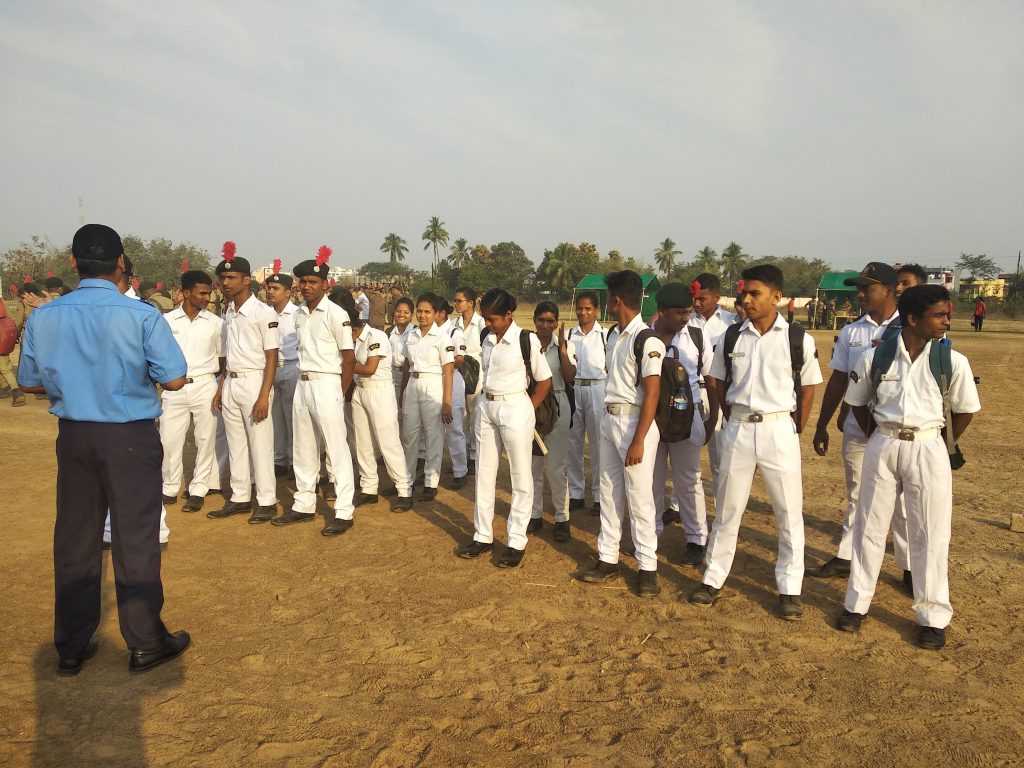 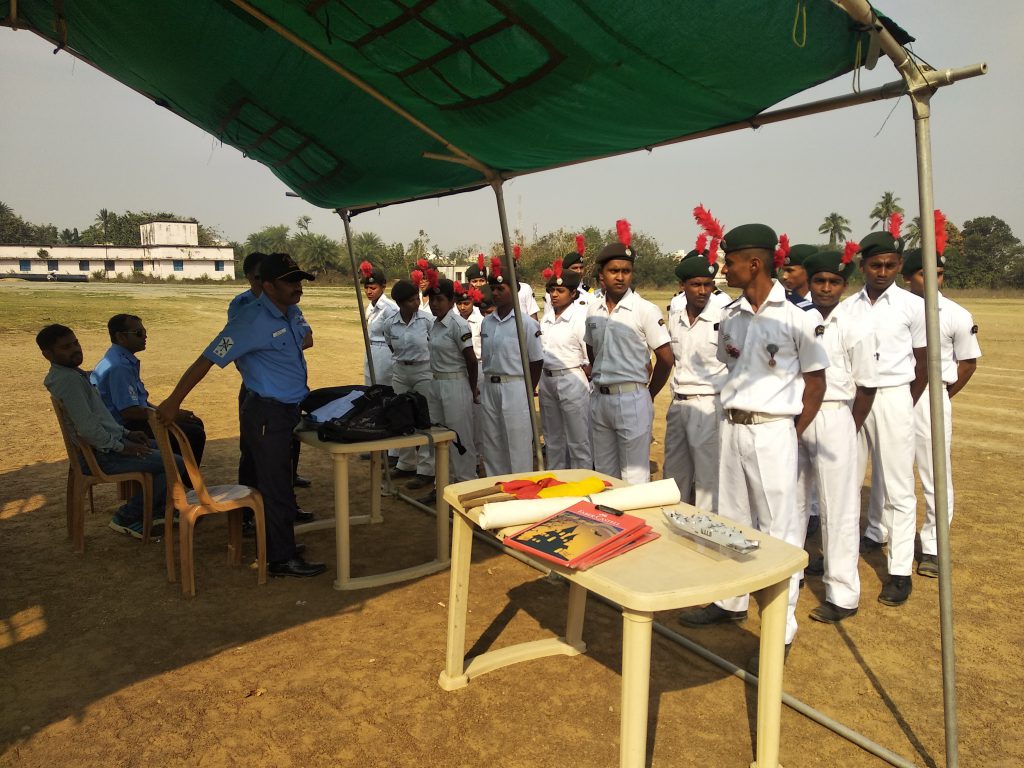 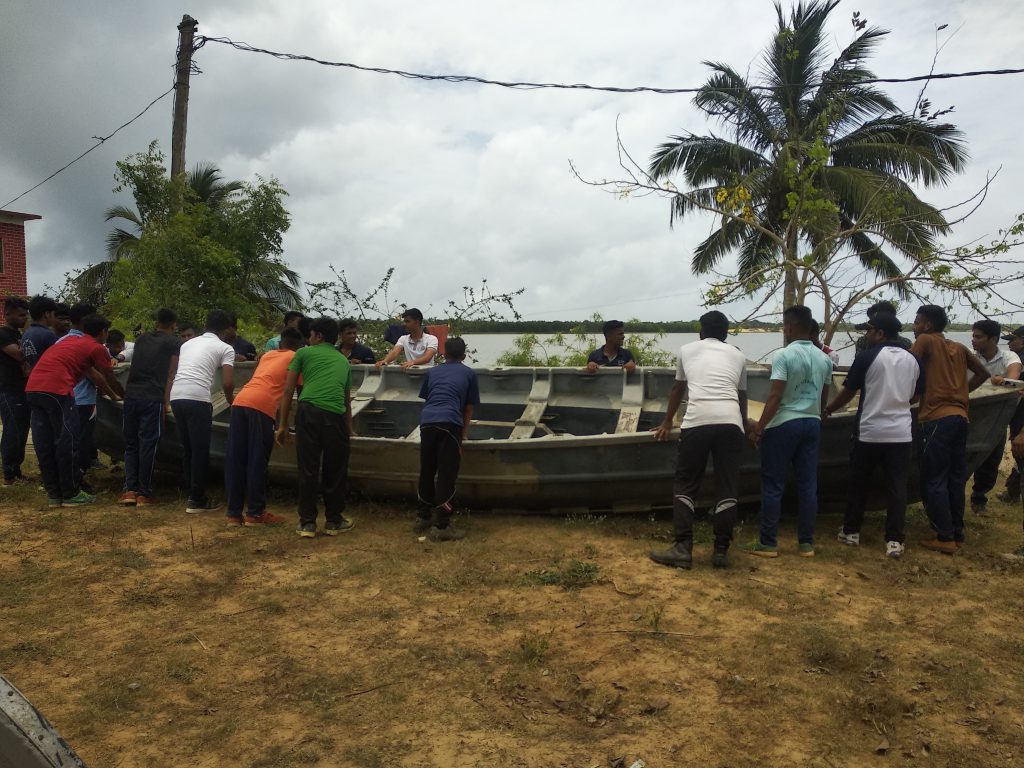 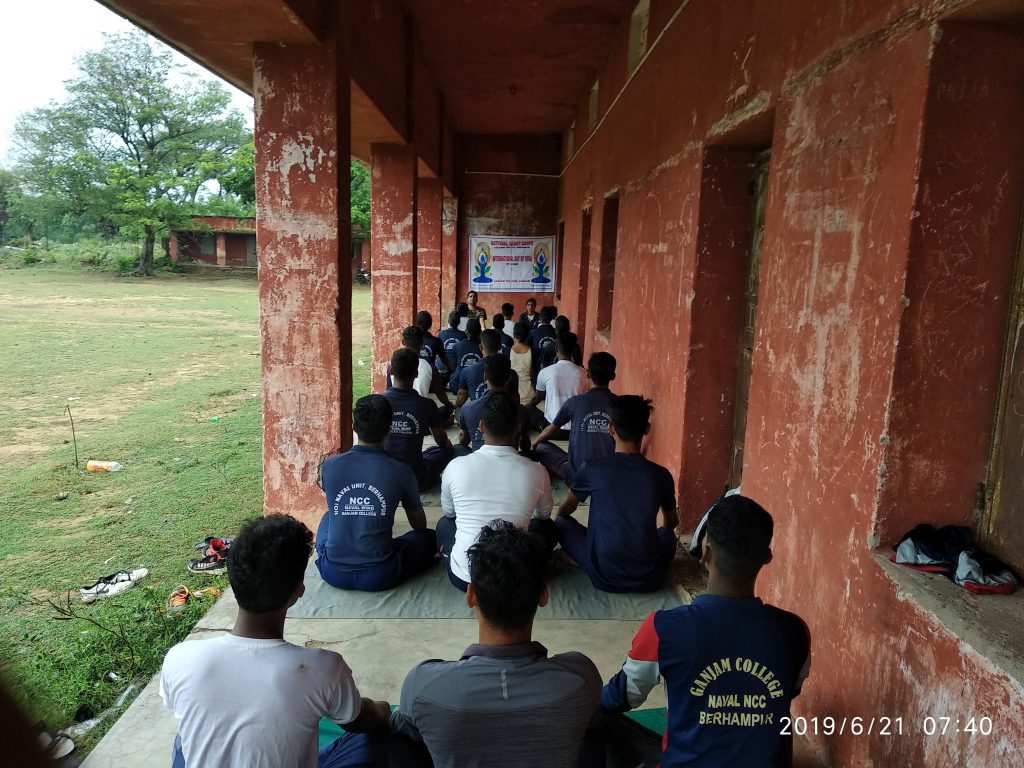 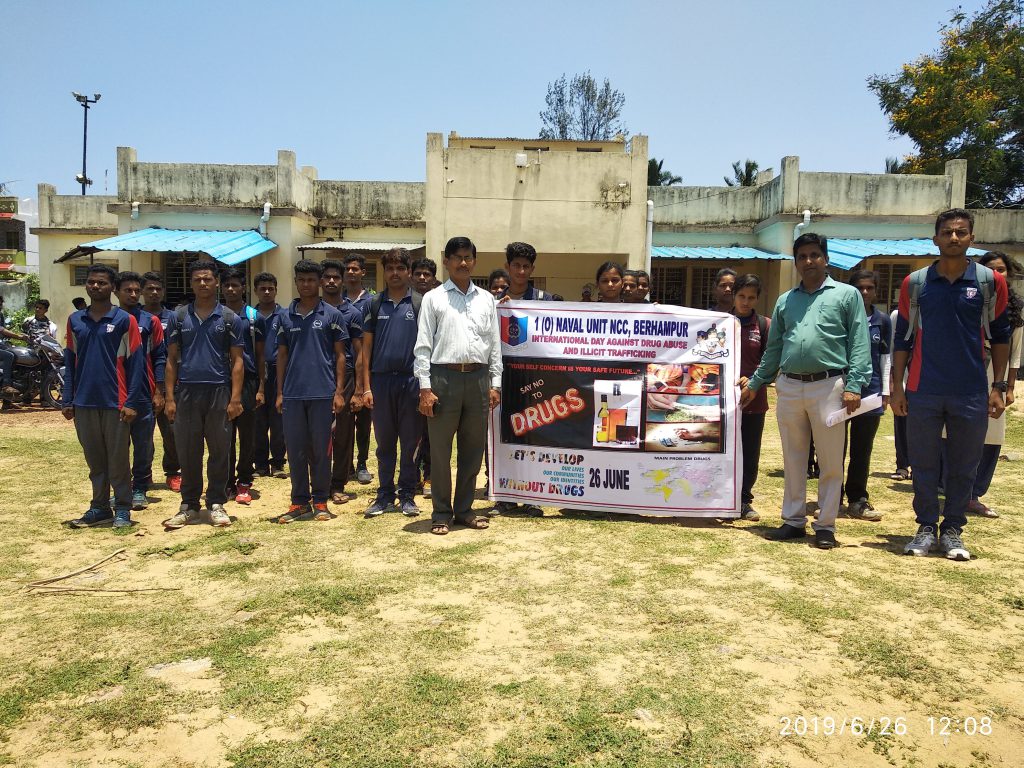 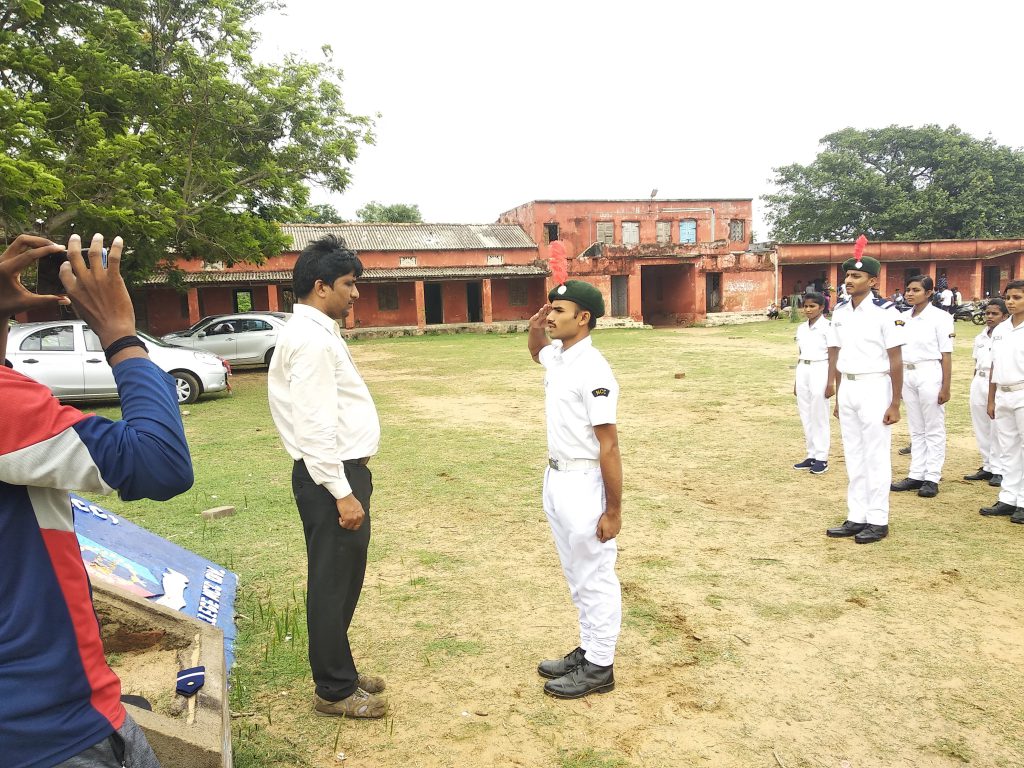 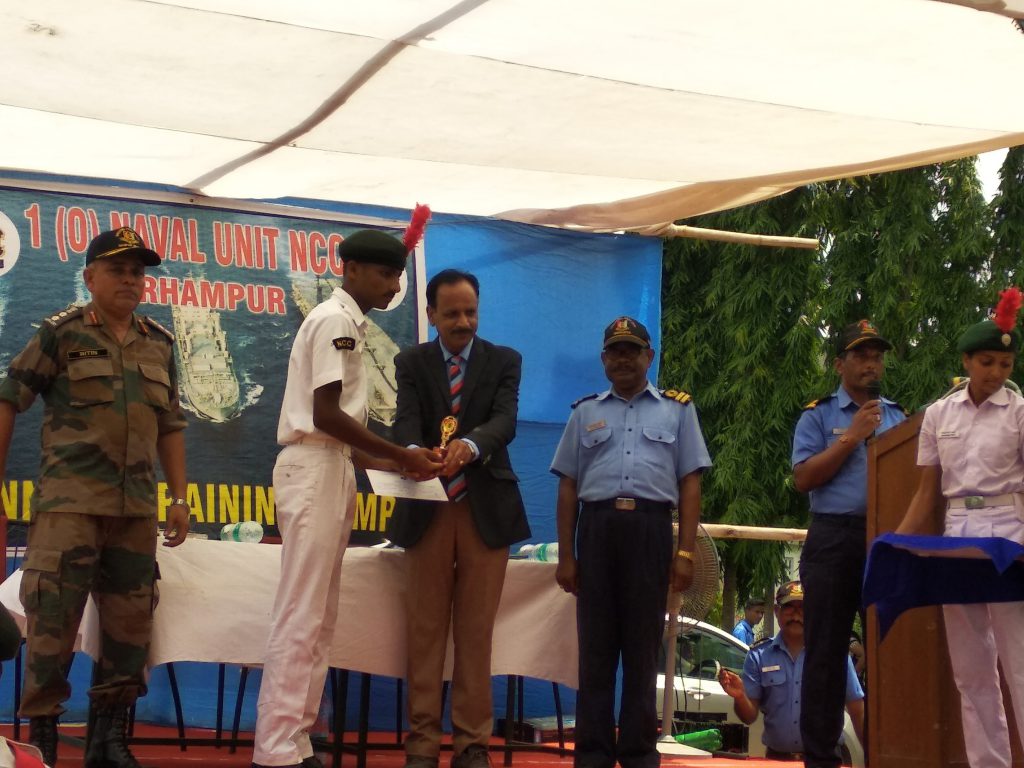 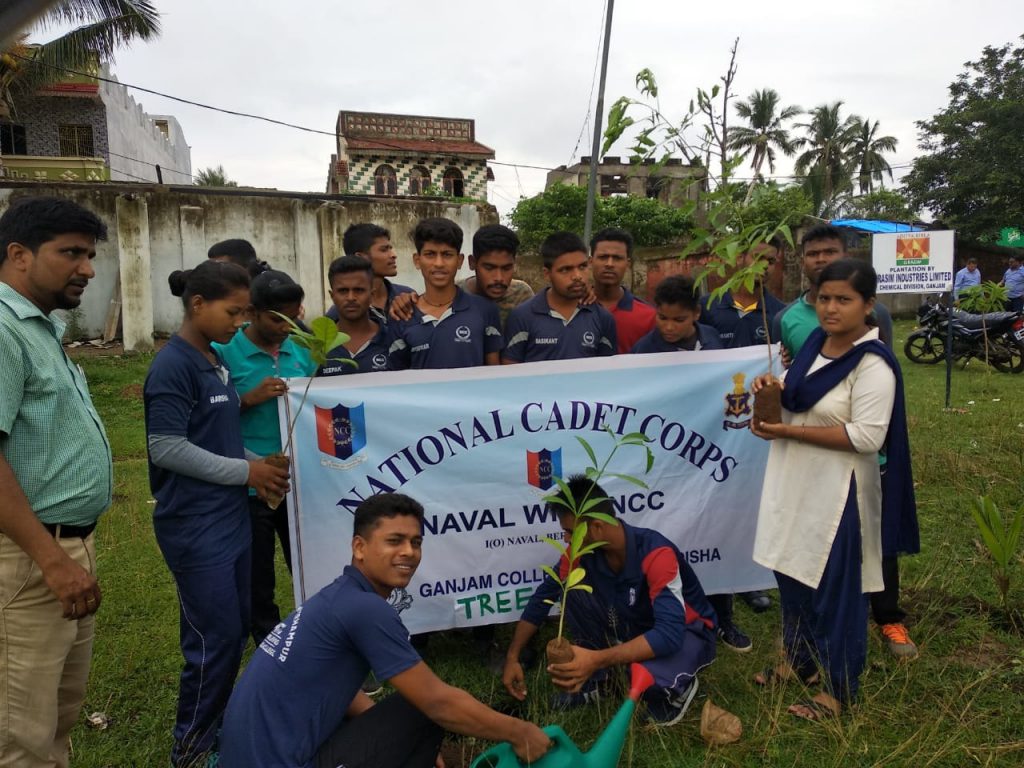 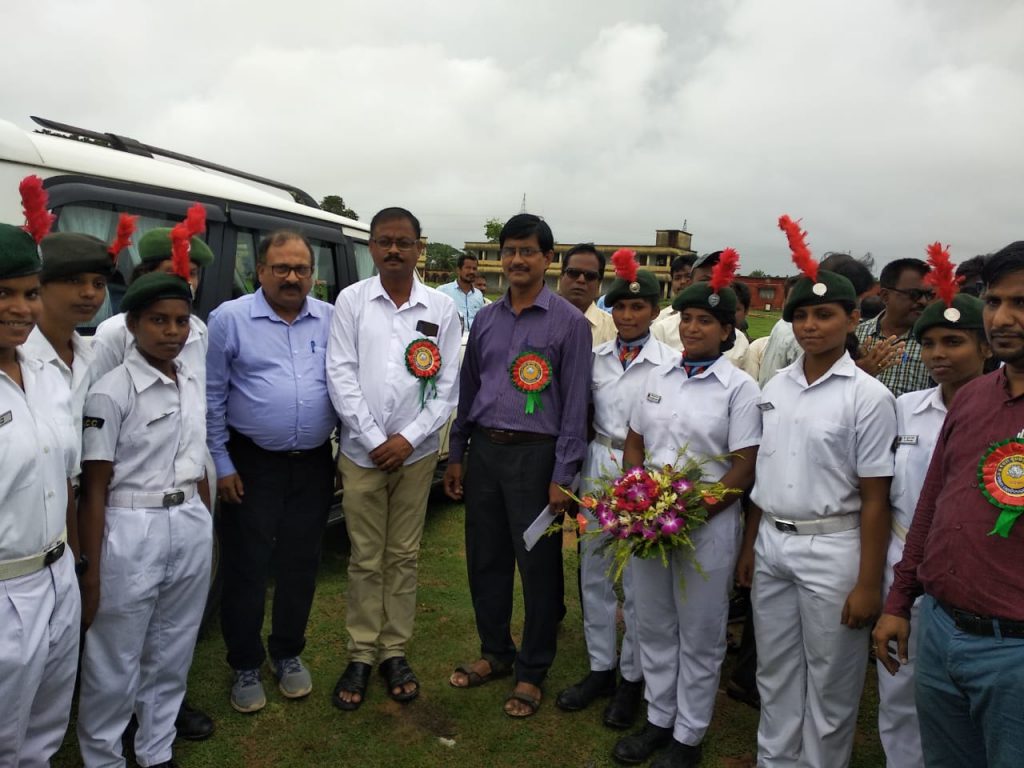 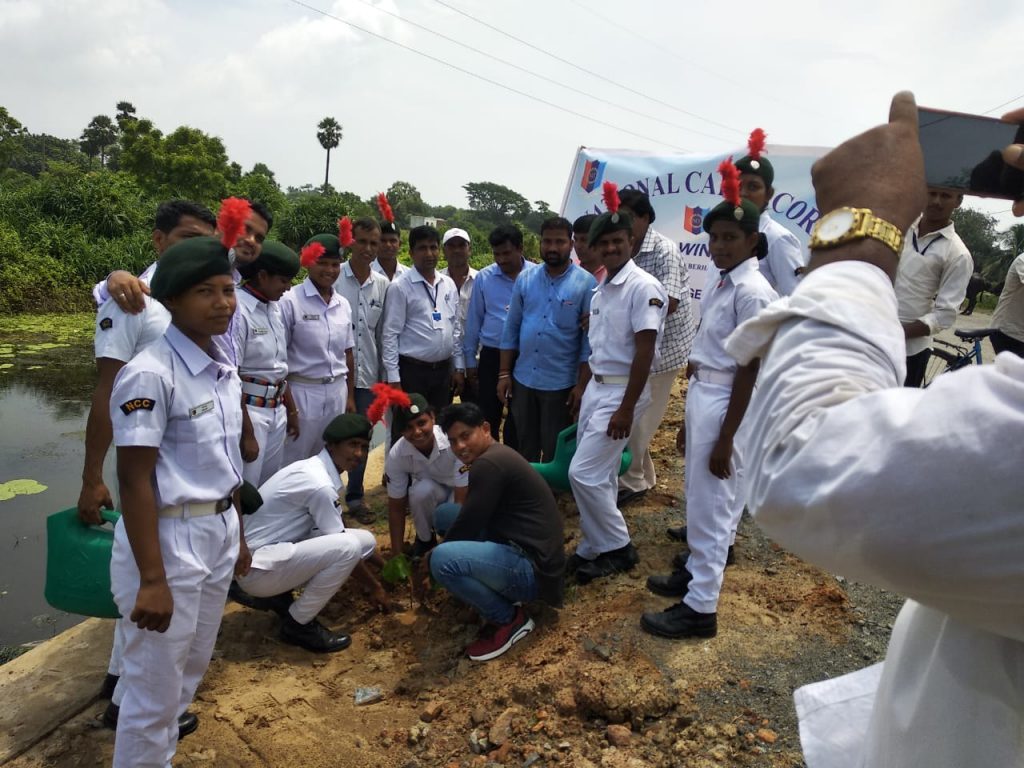 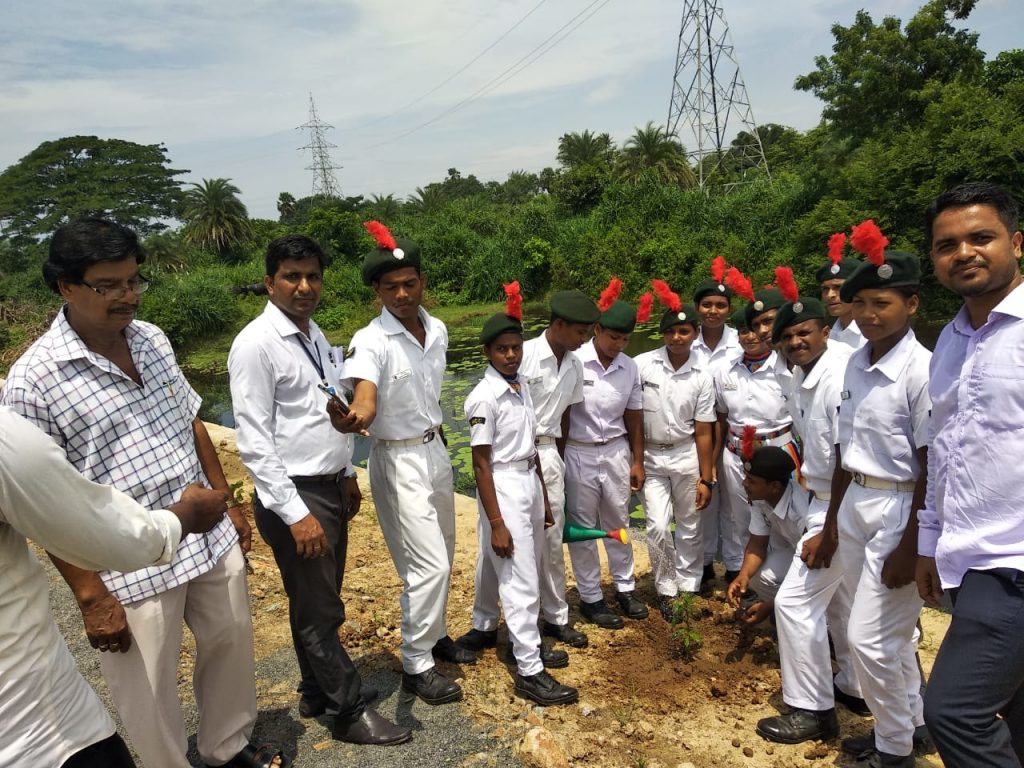 NCC has adopted community development activities with the aim of imbibing amongst cadets selfless service to the community, dignity of labor importance of self help, need to protect the environment and to assist weaker sections of the society in their upliftment. This was envisaged through programmes involving :

The National Cadet Corps is a Tri-Services Organization, comprising the Navy, Army and Air Force, engaged in grooming the youth of the country into disciplined and patriotic citizens, which was created under the Indian Defense Act, 1917 with the Aim to make up the shortage of the Army. Upon the recommendation of the committee headed by Pandit H N, National Cadet Corps came into existence under the National Cadet Corps Act XXXI of 1948 under the Ministry of Defence (MoD). The Naval Wing was introduced in 1950 and the NCC curriculum was developed at the behest of Late Pandit Jawaharlal Nehru who took a keen interest in the growth of the NCC. Following the 1962 Sino-Indian War, to meet the requirement of the Nation, the NCC training was made compulsory in 1963. In 1968, the Corps was again made voluntary.

The NCC is a responsive, learning and continuously evolving organization. Its activity is guided by certain core values that we endeavor to instill among all ranks of the NCC.

These include the following:

(a) A sense of patriotic commitment to encourage cadets to contribute to national development.

(b) Respect for diversities in religion, language, culture, ethnicity, life style and habitat to instill a sense of National unity and social cohesion.

(c) Abiding commitment to learn and adhere to the norms and values enshrined in the Indian Constitution.

(d) Understanding the value of a just and impartial exercise of authority.

(e) Ability to participate in community development and other social programme.

(f) A healthy life style free of substance abuse and other unhealthy practices.

(g) Sensitivity to the needs of poor and socially disadvantaged fellow citizens.

(k) Respect for knowledge, wisdom and the power of ideas.

The National Cadet Corps is the Indian Military Cadet Corps with its Head Quarters at New Delhi. It is a voluntary organization which recruits cadets from high schools, colleges and Universities all over India. The Cadets are given basic military training in small arms and parades. The officers and cadets have no liability for active military service once they complete their course but are given preference over general candidates during selections based on the achievements in the corps.

The NCC in India was formed as per the National Cadet Corps Act of 1948.  It was raised on 15 July 1948. The origin of NCC can be traced back to the ‘University Corps’, which was created under the Indian Defence Act 1917, with the objective to make up the shortage of the Army. In 1920, when the Indian Territorial Act was passed, the ‘University Corps’ was replaced by the University Training Corps (UTC). The aim was to raise the status of the UTC and make it more attractive to the youth. The UTC Officers and cadets dressed like the army. It was a significant step towards the Indianisation of armed forces. It was rechristened in the form of UOTC so the National Cadet Corps can be considered as a successor of the University Officers Training Corps (UOTC) which was established by the British Government in 1942. During World War II, the UOTC never came up to the expectations set by the British. This led to the idea that some better schemes should be formed, which could train more young men in a better way, even during peace. A committee headed by Pandit Hradaya Nath Kunjru recommended a cadet organization to be established in schools and colleges at a national level. The National Cadet Corps Act was accepted by the Governor General and on 15 July 1948 the National Cadet Corps came into existence.

In 1948, the Girls Division was raised in order to give equal opportunities to school and college going girls. The NCC was given an inter-service image in 1950 when the Air Wing was added, followed by the Naval Wing in 1952. Same year, the NCC curriculum was extended to include community development/social service activities as a part of the NCC syllabus at the behest of Late Pandit Jawaharlal Nehru who took keen interest in the growth of the NCC. Following the 1962 Sino-Indian War, to meet the requirement of the Nation, the NCC training was made compulsory in 1963. In 1968, the Corps was again made voluntary.

During Indo-Pakistani war of 1965 & Bangladesh-Pakistani war of 1971, NCC cadets were second line of defense. They organized camp to assist ordnance factories, supplying arms and ammunition to the front and also were used as patrol parties to capture enemy paratroopers. The NCC cadets also worked hand in hand with the Civil defense authorities and actively took part in rescue works and traffic control.

After 1965 and 1971 wars NCC syllabus was revised. Rather than just being second line of defense, NCC syllabus laid greater stress on developing quality of leadership and officer like qualities. The military training which the NCC cadets received was reduced and greater importance was given to other areas like social service and youth management.